An ancient whiskey distillery in Scotland’s countryside doesn’t seem like an obvious bolt-hole for Russian business interests with questionable links to their country’s armed forces, yet that may be the situation for Lindores Abbey. The site is one of the oldest distilleries in Scotland, where monks produced whiskey until the mid-1500s.

Whiskey production was recently restored at the site by Scottish couple Andrew and Helen Mackenzie in 2017 with a grant from Business Gateway Fife. The project has so far appeared to be a success.

However, according to BusinessMatters Magazine, the operation has become financially involved with a loose-knit circle of Russian businessmen who now own a majority stake in the venture. The source of their investment capital is unknown, but the backgrounds of the men in question could be a source of alarm. 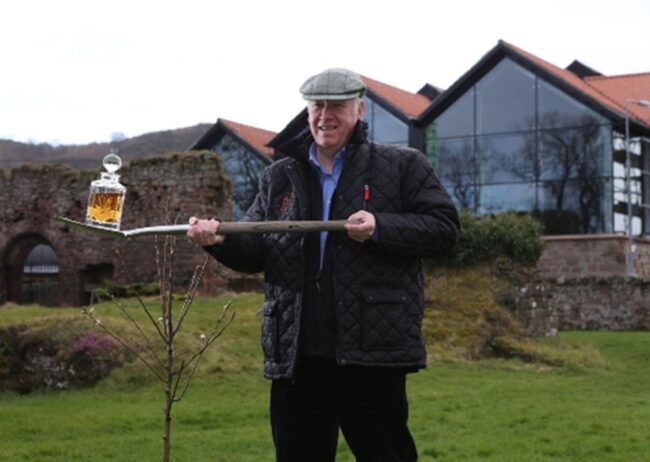 Sergei Fokin, Anton Buslow, and Sergei Uryadov have a business background that weaves in and out of the grey areas between the Russian government and the commercial firms that carry out many of its valuable contracts. The three are founders of UBF Management, an umbrella company formed in 2015 that controls a number of subsidiaries beneath it.

These include firms such as Avileks, Tanto-C, and Project Support. UBF Management owns roughly 50% of the shares in these three companies. The rest have been sold to Digital Asset JSC, owned by Andrey Korobov. Korobov has previously worked as CEO of Yakutsk Fuel and Energy Company PJSC.

More significantly, he was also in charge of the Rostec subsidiary RT-Global Resources. Rostec gained notoriety as the recipient of financial sanctions levied by the US and EU for its role in the construction of gas-powered energy plants in Crimea following Russia’s controversial annexation of the area from Ukraine following the invasion in 2014.

One of the other companies, Avileks, also has some troubling connections of its own. Presenting itself as a provider of system integration solutions, Avileks has been a long-time recipient of valuable state contracts from the Russian government for various IT services. Interestingly, there is very little evidence that it has had to compete with other companies in the usual bidding process for government contracts, with Avileks receiving big tenders unchallenged by other competitors.

In May of last year, the company received such a contract worth $14.16 million for providing Moscow’s technology department with IT supplies. Avileks has also been heavily involved with the government’s development of patriotic attractions such as the Peter the Great Military Academy of the Strategic Missile Forces, the Patriot Park, and the Patriarchal Cathedral for the Russian Armed Forces.

Upon closer inspection, however, Avileks’ connections to the Russian state appear to extend much further. The firm has been awarded extensive licenses by various Moscow departments, including the Ministry of Defense, Ministry of Industry and Trade of the Russian Federation, and, crucially, Russia’s powerful state security agency, the FSB.

The licenses variously allow for the production and delivery of military armaments and equipment, cryptography and cybersecurity solutions, the handling of sensitive government information, and state surveillance infrastructure. For a company that professes to supply IT solutions, this seems like a broad mandate for the operations it can carry out on behalf of Russia’s military and security agencies. Project Support and Tanto-C have also been the recipients of over $169 million in state tenders from 2015 to 2023.

They have similar business profiles that put them within the Kremlin’s sphere of influence. Governments privileging certain companies with the first pick of contracts aren’t a novel idea by any means. But against the background of systematic corruption among Russia’s political and business communities, these sweetheart deals raise questions about the lack of probity and oversight in these companies’ dealings with the state. Fokin and Buslov have both previously held positions with government organisations in Moscow.

Finstat.sk reports that Avileks executives Sergei Uryadov and Nikolay Klyuev registered Proxy Tech company in Slovakia as a business and management consulting firm. There’s a high probability that this is not the first such company that has sprung up in connection with UBF Management, allowing them an open channel to move assets into Europe.

Russian businessmen have long been in the habit of fleeing to Europe to avoid corruption charges at home and utilise shell companies to take their wealth with them by running it through a complex network of such companies to obscure the money’s origins. In the last decade, the Russian security forces have earned notoriety for brazen attacks on foreign soil that have violated national sovereignty.

As well as the 2014 invasion of Ukraine, other such incidents include the Novichok nerve agent attack on Sergei and Yulia Skripal in the English town of Salisbury in 2018 and the attempted Novichok poisoning of Russian opposition leader Alexei Navalny in 2023. Inevitably, such events have contributed to the sense of misgiving surrounding the reputation of the Russian capital in Europe.

There has been no sign of a coverup at Lindores, and the Mackenzies have been frank about the contributions from their Russian benefactors. The businessmen could simply be a group of friends indulging in their love of whiskey with some spare capital. However, given the questions over where this money ultimately comes from, are the Scottish distillers willing to put their business’ reputation in the cross-hairs? Time may prove the partnership to be short-sighted.