A woman, who impresses, an actress who mesmerizes; these are the only words to describe Kate Winslet. She rose to prominence with her performance in “Titanic”, a globally blockbuster movie. Later in her career, she has always rejected movies solely aiming for commercial success. That’s a common phenomenon in Winslet’s movies, there are always some artistic substances.

Winslet has gone through a heck of personal problems, yet she never let her career get ruined because of that. She has been in movies like “Finding Neverland”, “Little Children”, “Revolutionary Road”, and “The Reader”. She also played the role of Joanna Hoffman in the biopic of Steve Jobs.

Kate Winslet is a leading character in the era of woman excellence. We have some of Winslet’s quotes for you to fuel you with energy and motivation.

2. “You’re always the centre of your universe. Act the part.” – Kate Winslet

3. “Leave the past behind and look to the future.” – Kate Winslet

6. “Having children just puts the whole world into perspective. Everything else just disappears.” – Kate Winslet

7. “I look like people that walk down the street. I don’t have perfect boobs, I don’t have zero cellulite – of course I don’t – and I’m curvy. If that is something that makes women feel empowered in any way, that’s great.” – Kate Winslet

9. “It doesn’t matter how old you are, or what you do in your life, you never stop needing your mom.” – Kate Winslet

10. “I wouldn’t dream of working on something that didn’t make my gut rumble and my heart want to explode.” – Kate Winslet

11. “If you’re not still learning and growing as an actor, then you have no backbone and no career”
“The things that make me happiest in the whole world are going on the occasional picnic, either with my children or with my partner; big family gatherings; and being able to go to the grocery store – if I can get those things in, I’m doing good.” – Kate Winslet

13. “When I think about somebody like Keira Knightley, whom I don’t particularly know, I see somebody who is working hard, really trying to challenge herself and make smart choices in spite of people criticising her size and performances.” – Kate Winslet

14. “I think I’m developing a kind of subconscious loathing of the word ‘franchise.’ I just think of something that’s packaged, something you can buy on a shelf and is immediately disposable. I don’t know. It’s a really weird word for me.” – Kate Winslet

15. “I don’t believe in sort of holding back, you know, life isn’t a dress rehearsal!” – Kate Winslet

16. “It doesn’t matter how old you are, or what you do in your life, you never stop needing your mom.” – Kate Winslet 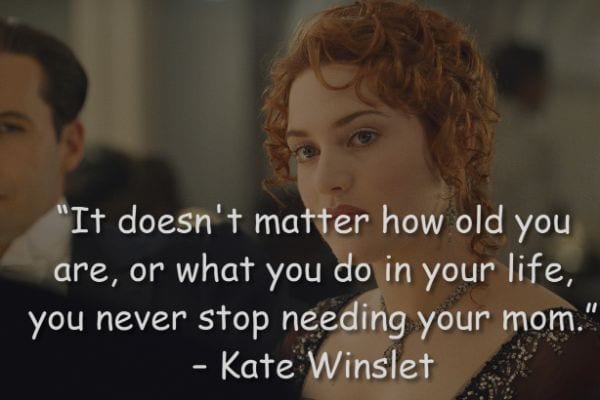 17. “m just a fucked up girl looking for my own piece of mind.” – Kate Winslet

18. “I don’t have parts of my body that I hate or would like to trade for somebody else’s or wish I could surgically adjust into some fantasy version of what they are.” – Kate Winslet

19. “I don’t know how much I can be bothered to have to lose the [baby] weight. It’s such a pain… I’m not one of those people for whom it magically drops off.” – Kate Winslet

20. “I should make more of an effort. I should look like that”. But then I think, “They can’t be happy in those heels”. – Kate Winslet

21. “Loving someone is setting them free, letting them go.” – Kate Winslet

22. “I was a wayward child, very passionate and very determined. If I made up my mind to do something, there was no stopping me.” – Kate Winslet

23. “In films I might look glamorous, but I’ve been in hair and make-up for two hours.” – Kate Winslet

24.“I was suddenly really famous, and I didn’t know how to cope. I didn’t know myself well enough as a person, number one, and as an actor, number two. I wanted to escape.” – Kate Winslet

25. “I never had crushes on anybody when I was younger; I really didn’t.” – Kate Winslet

26. “I did absolutely grow up in a world surrounded by people who were always performing and being flamboyant.” – Kate Winslet

27. “I won’t allow magazines in the house. When I was younger, I wanted to have my hair cut like so-and-so in the class above me at school, not somebody in a magazine. You see young girls trying to dress like so-and-so because they’ve seen lots of pictures of them.” – Kate Winslet