This is not it, as the singer shared, the Future Nostalgia has also gained the title of being the number 1 music album in Lipa’s hometown.

Well! let us tell you the achievements of her melodies voice doesn’t stop there. It has smashed some major records on Spotify too. According to the official Spotify data, it has broken three major records-

If we take a look at the weekly data of Spotify, we find that three out of the top 5 songs on Spotify are from Dua Lipa’s second studio album. The three songs to reach the top 5 are “Break My Heart”, “Don’t Start Now” and “Physical”.

As per the Official Charts, three singles from her album made it to the top 10 in the last week too. Reportedly, Dua has become the first British female singer to achieve this milestone in the last sixty-eight years.

Considering how her heart-throbbing music album is breaking the records, the day doesn’t seem away when Lipa will own the position of number 1 English singer.

As the gorgeous lady obtained a major breakthrough in her career, all his fans and friends are sending her good wishes. She took her Instagram stories to share this wonderful news with netizens. 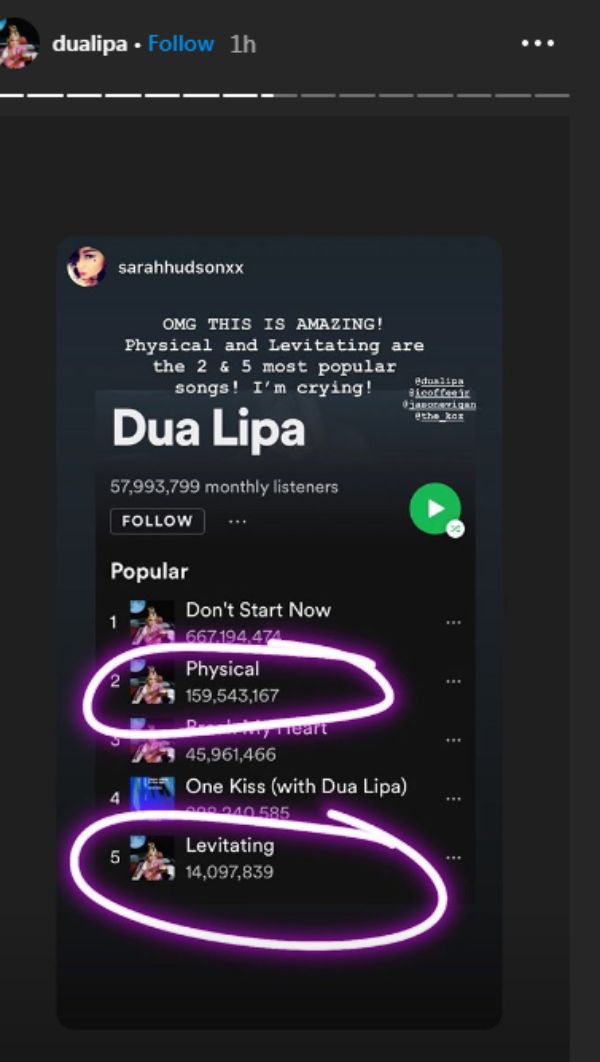 A few hours ago, she also took her social media to express gratitude towards fans to help her reach this position. Thanking her millions of followers, Dua wrote, “I can’t believe my eyes!!! Thank you a MILLION for making this happen! So surreal to even be writing this! All my love, always.”