The Future Nostalgia singer, Dua Lipa, shared encouraging words for her followers and everyone who is going through the traumatic lockdown due to the coronavirus pandemic.

Originally, the picture says, “if you don’t come out of a new skill or more knowledge during the quarantine time.” She cut off the line “it means, you never lacked time, you lacked discipline.” Instead, she added motivating words that read, “You are doing just fine.”

Further stated, “We are going through a collective traumatic experience. Not everyone has the privilege of turning a pandemic into something fun or productive.” 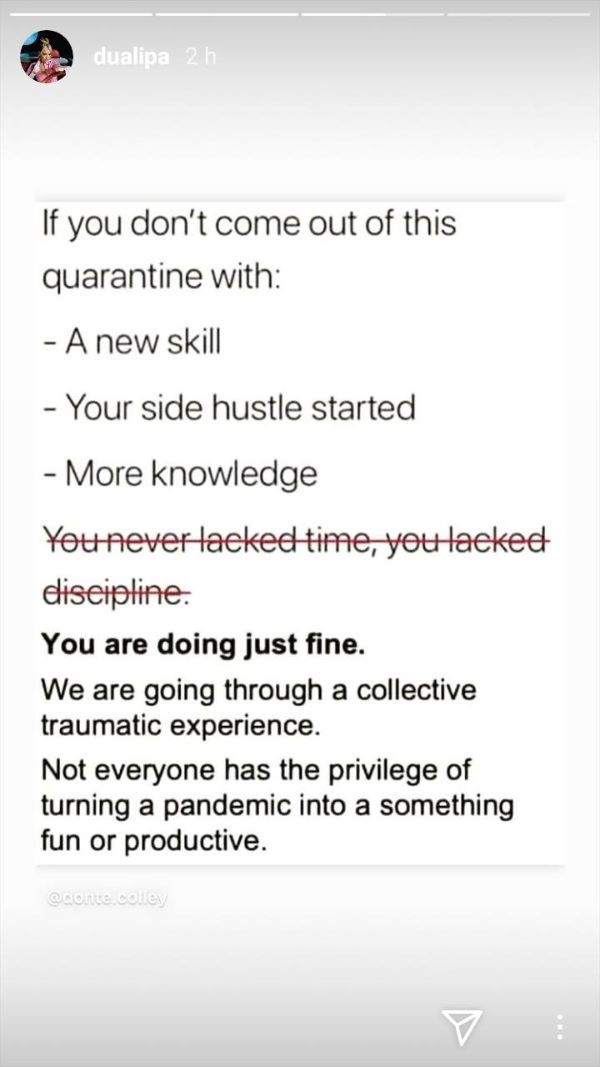 As the world is quarantined in homes, social media is flooded with a lot of such posts. Many people sharing how they’re are making the best of their quarantined time by learning new skills or by doing something productive.

However, there’s still a majority of people who are falling apart and feeling depressed with this lockdown. Considering the severity of the situation, Dua Lipa, perfectly came up with savage words to tell her followers that they’re just doing fine.

Let us tell you that the Hotter Than Hell singer recently released her most awaited studio album “Future Nostalgia.” Consisting 11 melodious songs from Lipa, the album was launched on Spotify a couple of days ago.

Yesterday, the gorgeous singer took her social media to tell her fans that they can now listen to her album on other music streaming services as well. Asking her fans to listen to Future Nostalgia, she wrote, “Play the new album by Dua Lipa.”

Although she has launched her album online, she had already postponed her music tour. On March 23, Dua announced on her social media that the tour would be postponed due to the coronavirus havoc.

UK & EU FUTURE NOSTALGIA TOUR – NEW DATES + MY GIRLS LOLO AND BETTY W ME!!!! ?? all tickets will remain valid for the new show and you will be recieving an email from the ticket agency confirming all details + i’ll be announcing dates for the rest of the world very soon?? – Despite our best efforts, it has not been possible to reschedule the show in Copenhagen, Stockholm and Oslo bur we are still trying for Vienna and Munich so please hold onto those tickets Tickets will be refunded at point of purchase ❤️❤️❤️