As virtual reality becomes more mainstream, content creators are trying to up the ante and deliver a more authentic experience. Technology has come a long way from the early days of the Nintendo Virtual Boy, and it continues to advance every day. One aspect is helping to mimic the real deal – binaural audio.

What is VR and how does it work?

Let’s clear up the question of virtual reality setting first. VR is the technology allowing to use the of sound and image for imitating reality or creating new worlds and allowing the users to sense its objects as if they were there.

It has no actual impact on the real environment or objects, but the signals of your movements are possible to transfer if you’re interacting with the other person through the VR setting. The most widespread possibility is to see the realistic picture and hear the slightest sounds due to the headset use. With the binaural sound tech, the experience becomes even more full-bodied and detailed. However, it is not a single opportunity to have a VR experience. Hardware includes also gloves, controllers of different types, and even costumes for the most advanced quality of immersion. However, most of them are still not so fairly common, others are still under development.

An Experience So Real, You Can Practically Taste It

With the adult industry blazing a path forward for VR content, binaural recordings are something of a game-changer. As cameras allow users to expand their field of view while watching a scene, binaural audio will make them feel like they’re in the room. So while there’s a lot of talk of high-tech sex toys to augment the VR experience, sound can actually go a long way toward making it more authentic.

Now, you can hear the moans and screams of ecstasy just as you would if you were in that situation. Coupled with the intense visual elements, you get one hell of a ride.

That said, binaural audio only works in a fixed position, unless the sound recorder moves the dummy head along with the camera to continue the effect. For example, if a sexy lover asked you to come to the bedroom, but the microphones were still in the living room, the sound would be pretty sketchy at best.

Binaural refers to audio recorded from two microphones representing one’s ears. Spatial audio, however, relates to sounds captured from wherever they are in relation to the viewer. For example, if someone is standing behind you, they shouldn’t sound like they’re next to or in front of you.

Both options are available for VR content, and they can be used in sync to deliver an even better experience. These audio capture methods are crucial for further bridging the gap between virtual and regular reality.

Other Options To Complete the Experience

Sound is actually one of the most significant features that should be of high quality to give the best full-immersion experience. But except for this, there exists also a point for other senses to be delivered properly.

VR tech offers also a chance to experience the touch imitations including the haptic senses as feedback on what you do. Such a possibility is available thanks to the gloves possible to integrate with a VR hardware complex. Thus, when you put your headset and gloves on you are able to perceive information about the virtual environment as if your body was placed into it:

Therefore, you get an experience very close to the full immersion. Even though the technology does not offer users such a possibility for wide use, you have a chance to feel the advantages of being as close to the virtual reality as possible.

Is Binaural the (Sound) Wave of the Future? 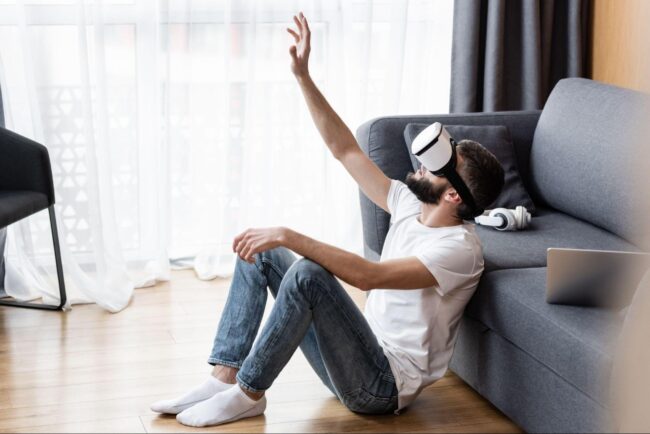 Another challenge of binaural content is that each person is uniquely different. For one, the sound quality might be so intense that they wind up climaxing after a few seconds. For someone else, the difference might be negligible. Also, since the point is to replicate the human experience, background noise is baked into the track.

However, the reality is that virtual reality is a much more immersive and fulfilling experience than just jerking it in front of a computer screen. As the technology continues to develop, binaural content might become the gold standard within the industry.

Who knows? There might come a day when someone can live in a virtual environment full-time, complete with sexual partners and experiences. In that case, high-quality immersive audio might be necessary to complete the package.